I first met Dannii & Sul at their friend's wedding and was so happy to be asked to photograph theirs.

First of all, let's talk about this outfit. Dannii chose a Alice Temperley GOLD jumpsuit accompanied with gold Jimmy Choo shoes. I mean...

I started the day with Dannii, her lovely lovely parents, sisters and bridesmaids. I actually fell in love with the perfume Dannii chose (by Jo Malone) and ended up buying it the week after the wedding.

I met up with Sul and his boys at the church and got a few shots of them waiting. Moments later - the girls arrived on the Newport bus and the ceremony was performed full of smiles.

Unfortunately, as often happens in Wales, the heavens opened, and I mean opened. The wedding party headed off on the bus to Cardiff Royal College of Music and Drama and hurried in for prosecco.

Luckily, the rain stopped and we were able to get a few shots outside before it was time for dinner, speeches and dancing.

Dannii & Sul had such a relaxed day with nothing but fun, friends, family and laughter.

Lucy & Pedro at The Temple of Peace 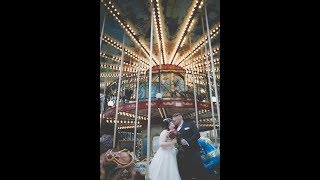